As a part of a Whatsapp group, I was privy to this question : What is more important – values and culture or system and process? The drift of the conversation was towards most people feeling that values turned into behaviour that are embedded in a culture is a positive state of affairs than a system and process holding sway in an organization. This set me thinking on how they relate to each other.

And here are my thoughts. 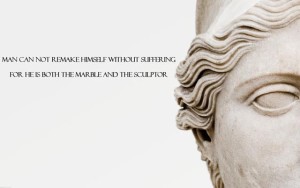 If you find people in an organization very empathetic/supportive & step out of the organization, you won’t find a concentration of people exhibiting the same behaviours across the street. The dichotomy of values/culture v/s system/process is conceptual, not real. In creating a new set-up, we can make a cognitive beginning with one or the other. In an existing concern, it becomes a chicken & egg story as both values/culture & system/processes end up getting transmuted into each other all the time. The empathetic/supportive behaviour in an established organization is a systemic attribute, not depending on specific individuals. It is a good thing when you want continuity & it turns into a challenge when you want ‘change’. And yes, too much empathy/support can be a challenge if detachment/autonomy is what is required.

An organization, just like a man, is both the marble & the sculptor.

A friend of mine, Tanvi, asserted that values & behaviour is the marble, the raw ingredient, that serves as the foundation of everything. Her words : “I feel the marble are the values and behaviors…the raw ingredients to making the organization what it is…it can’t go wrong…sculptor can copy the systems and processes from others without ensuring that marble is of good quality or not… But a good quality marble can never be wrong…Its like the roots and foundations of the organization and hence I still feel values and behaviors are more important.”

This made me explore further.

One starts with values & behaviour, but one does not stop with them. Institution -builders recognize the solidity & permanence of a system/process. They will seek to convert the raw ingredient ( values & behaviours) into a building block.

The Geneva convention is a building block. So is the Hippocratic oath. The first tries to streamline even the process of conducting war! The second does the same for the practice of medicine.

The move is towards functioning as a system that regulates & adapts to the changing context but preserves its core.

What is in the core, also called the system-structure?

The core, after all is like the nucleus of an atom around which everything revolves. Interestingly, in a social system, by definition, the core is an amalgam of human values! There is no real separation of values/behaviour & system/ process! To the extent that we perceive this separation, we can be called as alienated souls. This happens when a system & process operate with a clinical efficiency that shrouds the very values they are based on; just as electrons whizzing along their orbits can shroud the nucleus, the only thing that stays in the centre & is not moving.

What use are values if one cannot feel the human touch?

That’s where we start conceptual separation to trace back the core at least on paper, which is indeed, human values. In systems thinking, we acknowledge that belief-patterns, including our worldview & values form the very core,the structure of a social system. To change the system, you make changes in the core.

There is an example of a values/ culture & system/process coming across as one indivisible whole. A tribe before making momentous changes makes the decision-makers sit in a way that they are encircled by small children. This reminds the decision-makers to factor in the consequences of their decision for the 7th generation. This is also done explicitly.

What has been achieved?

Values & behaviour are not mechanized, but humanized by a primal process that makes the system-core visible, both literally & metaphorically. The core shows them to be a tightly-knit community that enshrines sustainable living for future generations- an enlightening worldview for a supposedly primitive people! They may not know the fancy words of system, process, values or culture but they embody the best outcome! They are lucky to have missed out on our education. It makes them see the world as one.

( Special thanks to Tanvi Chaturvedi & other members of the Innovative HR whatsapp group. Their discussion helped me explore this topic. A lot of the sense-making achieved here is a direct result of their dialogue and discussion. They made the learning happen)