There is a language of cinema. I don’t quite understand it. Am not a movie buff, but I can go to great lengths to identify movies that I will savour. Critically acclaimed movies or underrated gems, that’s what I seek. Here are a few movies I saw recently, all foreign-language. 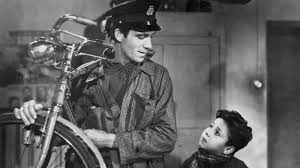 Can viewers experience cinematic purity? Be literally pulled into the movie because the movie-maker wants nothing to come in the way. Vittorio De Sica achieves this feat in Bicycle Thieves.

Maria pawns the family bedsheets so that her husband Antonio can get back his pawned bicycle, the only requirement for securing the job of sticking posters across Rome. It is the first day of work. Antonio leaves his son, Bruno at school and starts his work. When he has climbed atop a ladder for pasting a poster, a thief steals his bicycle. Anotonio gives chase, but fails to catch the thief. Without the bicycle, Antonio has literally nothing to fall back on. He decides to comb the entire city along with Bruno in search of the stolen bicycle. He is feeling so wronged inside. He rails against the indifference of a world thats too self-engrossed to care about a single individual whose world is going to pieces. And when hope dies away, he takes matters into his own hands.

Watched Bicycle Thieves twice so far, and am sure to watch it again. 1948. Italian.

In movies where characters live their lives as war rages on, the intensity of characters and the urgency of their interactions is ramped up. In Forbidden Games, Rene Clement, the director, banks upon the natural interplay between the two young protagonists. And how right he was!

When the Nazis occupy France, a well-to-do couple – with their young daughter, Paulette, who cradles a puppy – are fleeing Paris in their car. It is a chaotic scene as people are rushing to get away from the city. They are being bombed from the air. In one such bombing raid, the young child is orphaned. Even the puppy dies. 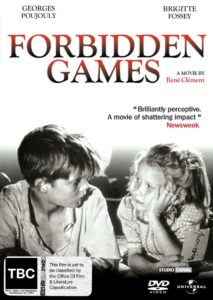 A young boy, Michel, who lives in a farmhouse close to the scene finds Paulette. Michel is older than Paulette. He takes her home and implores his family to let her stay. The family agrees even though the times are tough. As the war rages on in the background, the families in the countryside insist on living life that revolves around norms, rituals and traditions that signify a world based on order, goodness and divine benediction. Both Michel and Paulette cannot understand these rituals. They seek ways to find comfort and solace in an unsettling world that is coming apart . And one way to do that is to play forbidden games that violate the sensibilities of grown-ups. These forbidden games are purer in intent and spirit than anything the grown-ups profess to follow.

The movie sensitively conveys the inner world of children – their vulnerability and their innocence – as it is being shattered and convulsed by the ravages of war. Unforgettable. French. 1952.

Culture negotiates the demands of continuity and change. What if a noble man- highly exalted in social position but utterly powerless in effecting any change – becomes hell-bent on getting what he wants? Petrio Germi tackles this theme with elan in this gem of a movie! 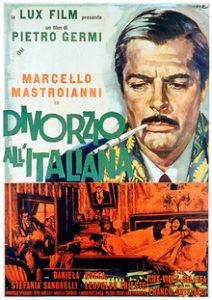 Ferdinando Cefalu, called Fefe,  lives in Agramonte, a town where the culture of the day decides the order of life.  That is why the poor Fefe cannot work because nobility cannot be expected to work! He is married to Rosalia, who dotes on him. He has a fancy for his much younger cousin, Angela, who lives in the adjoining mansion. Already tiring of his life with Rosalia, Fefe fantasises about getting rid of her. When he comes to know that Angela reciprocates his feelings, he plots a way out. Divorce that time is not legal in Italy. The only way out is Rosalia’s murder. But, how does one get rid of her? The law of the day offers a loophole. If Rosalia is shown to be having an affair, then Fefe can be partially exonerated for the fit of rage that would naturally envelop a husband and make him kill his wife. He would get a lighter jail-term and be free to live happily ever after with Angela. The resourceful Fefe decides to take his chances. He searches for a man who might fall for Rosalia and finds one! Fefe now gets this man to work at his place and stays away long enough for Cupid to strike. However, Rosalia, the ever-faithful wife does not oblige Fefe. He is getting exasperated. One day, things fall in place for Fefe, but not everything goes to plan..

Fefe is wily and desperate. The audiences still root for him. And are left to smile at the end. An entertaining dark comedy! Italian. 1961

Investigation of a Citizen above Suspicion 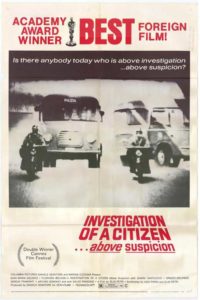 Investigation of a Citizen above suspicion, 1970/ Pic Courtesy – Movieposter shop

A twisted look at the hold of power – both positional and institutional – this movie makes us alternate between scratching our heads in disbelief and nodding at the plausibility of it all, moments later.

The chief of homicide, a powerful man, is all set to be transferred to the political branch of the city police. On the last day of his homicide posting, he kills a woman he is having a surreptitious affair with. After the murder, he leaves all possible clues in her apartment – fingerprints, a fragment of a tie he is wearing – so that all of the evidence points towards him. Everything points towards him as the murderer.

After this befuddling act, the chief ( never named in the movie)slips into his law-enforcement role and helps his successor to investigate the crime. He all but names himself as the murderer but soon finds that his police force just cannot bring themselves to confront and nail him. He dares his peers and subordinates, even lets his superiors know in less oblique ways. He finds, much to his amusement and later on, increasing consternation, that nobody takes the possibility seriously. When the police seek to browbeat the woman’s ex-husband into confessing the murder, the chief helps to absolve the man. What game is this chief playing? Why did he kill that woman? Why does he mock the system one moment and also uphold it the next? Why is he testing the limits of what he can get away with?

With a classic score by Ennio Morricone, this psychological masterpiece by Elio Petri makes for a very compelling viewing. Italian. 1970.

A movie that is about a young child and her fantasy that comes alive. And yet, you won’t be remiss if you decide against showing this to young children. Guillermo del Toro, the director, creates two parallel worlds that never really collide but have enough dark moments in both to make even adults uneasy.

Set in war-time Spain of 1944, Ofelia is an 11 year old girl who is travelling with her mother to meet and live with Captain Vidal, her stepfather, who commands a remote town camp that overlooks a mountain where Republican fighters are known to be hiding. Her real father has passed away. Ofelia’s mother, Carmen is pregnant and the Captain has called them to live with him, not out of any loving concern, but to ensure the safe birth of his baby boy – as he expects the unborn child to be. The fascist captain  has a ruthless, sadistic streak in him that makes him kill people on a whim. Ofelia does not like this new world that she has been forced into. 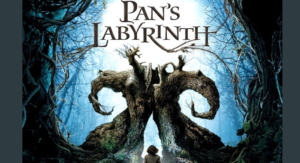 But unknown to all, she has also been ushered into a magical world by a flying insect, who morphs into a fairy. This fairy takes Ofelia to the laybrinth where a faun reveals to Ofelia that she is really a princess from the netherworld who escaped into the human world. To get back to her world, he asks her to complete three tasks, each more challenging than the other. What does Ofelia do? Does she believe in the faun and do his bidding? Is she so unhappy with her human life that she wants to escape? Or does the human life, with its attachments and imperatives, hold her back?

As Ofelia completes the first task, the turn of events make her undecided about what she should do next. She is compelled to make critical choices until she is asked to make one agonising final choice!

This is a spell-binding movie in which the two separate worlds pull you into the opposing imperatives so well that when Ofelia has to make her final choice, we realise we are being asked to make our choice as well. Great movie! Spanish. 2006.