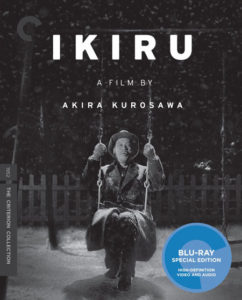 Most people like watching movies that entertain. A few are open to being more patient. These people will strive to engage with the movie on a deeper level, at least to begin with. Later on, it of course, pans out differently for different people. And the few who are in this category, make peace with that.

If you are among this select few, you should surely watch Ikiru. And if death and the meaning of life as cinematic themes sit easy with you, you cannot miss Ikiru. It will be a movie you will cherish forever.

So, what is Ikiru about?

Ikiru means ‘to live’ in Japanese. The story is simple. A lifelong bureaucrat comes to know that he has cancer and has only 6 months or so to live. When death stares him in the face, he realizes he has never truly lived. Caught up in a system that has reduced him to being a cog in the wheel, the man, Kanji Watanabe wonders whether he will ever get a chance to do anything that makes him come alive before he dies. There is nothing on the horizon. Till he digs out a buried file and decides to help build a children’s park. Against all odds.

Does he succeed? Watch to decide for yourself.

Interestingly, Watanabe dies a full 50 minutes before the movie ends. And no, I haven’t taken anything away from your movie-watching experience by revealing that. It is to make you wonder about the movie.

Kurowasa, the master director makes use of an inventive device to take the movie forward. After Watanabe dies, through a series of flashbacks, all of Watanabe’s associates piece together his life in the run-up to his (untimely-to them) death. They were not aware of his cancer, after all. How they make sense of Watanabe’s life and death is something of an oscillating journey from hope to despair about the human condition. Some would say, it is from despair to hope and they can also be right.

For change-makers, for people railing against the system, for successful people still feeling empty inside, and for people who just fear their life is passing by, Ikiru is a compelling watch.

You will get a wonderful opportunity to reflect upon your life. Take it.

“Why are you so incredibly alive? You are just so alive. That’s why I am envious..Before I die, I want to live just one day like you. I will live that way before I die. Until I’ve done it, I can’t just give up and die”

” I can’t afford to hate people. I don’t have that kind of time.”

“How beautiful, how truly beautiful. In the last 30 years, I’d all but forgotten about sunsets..But I haven’t got the time for this now”

“Sometimes I think of my death. I think of ceasing to be…and it is from these thoughts that Ikiru came.”

Kurosawa was all of 42 when he made this movie.