When business leaders prepare the world for tough decisions, their language says a lot. The choice of words, the metaphors they use, the imagery they put forth – everything seems carefully deliberated upon. So, you get a sense of the general consequence. It is left to each individual to infer what specifically the words of the leader could mean for her or him. Todays ET carries toughspeak by Cognizant CEO, Brian Humpries. Before I proceed, let me emphasise I am using the Cognizant CEO’s remarks as a reference point for my argument with neither indictment nor appreciation for Cognizant flowing out of my reflection. I fully respect that businesses have to remain viable to ensure livelihoods.

Referring to the possibility of job cuts at Cognizant in the near future, Brian Humpries said, “I do not believe in death by a thousand cuts, I would rather pull the Band-Aid off and get it behind us and set the context as to why this is critical and fast-forward to the future.”

Humpries painted a rich metapor on the organizational inflection point. His words – ” Its almost like having lived in a house for 20 years, having never moved, and having not done spring cleaning. When you do move, you tend to find a lot of stuff that you don’t really need anymore. At Cognizant, we need new eyes, a new perspective and to hone in on what we have that are hobbies and what is critical”

The metaphor speaks about a house, lack of cleaning, and a lot of stuff that might not be needed. What it does not say by implication is equally significant. The house is a place of work where people earn living wages. The cleaning means new choices about what to do or not to do, who has work, and who does not. The lot of stuff you don’t need are living people. The metaphor you use hides as much as it reveals. 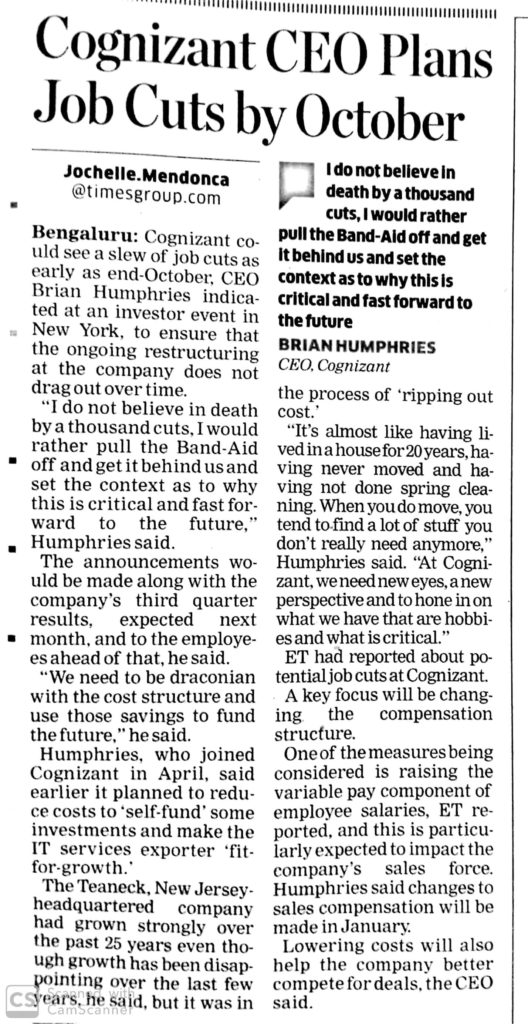 Humpries speaks about a new perspective. Here is a powerful perspective shared by the late Roger Fisher, a Law Professor at Harvard and director of the Negotiation Project. Fisher applied himself to the apocalyptical, almost unimaginable decision that can rest on the shoulders of a leader – the decision to launch a nuclear attack that results in the mutually assured destruction of millions of people on both sides and makes the region unlivable due to radiation fallout.

Like any good thinker, he put a lot of emphasis on defining the problem.

Roger Fisher knew that a leader imagining nuclear war was really dabbling in an abstract world. The leader is far removed from the scene of devastation at least at the moment of making the decision. She is also impregnably secure as far as personal survival is concerned. That is intended so that the ultimate decision-maker can be alive and functional for making the decision and launching the nuclear button. However this very distance and reassurance about own life renders the leader unable to visualise what his or her actions will bring about. After all, the words, ‘collateral damage’ do not really conjure up a vivid, living-breathing image to the mind’s eye. As Stalin had callously said, ‘A single death is a tragedy. A million deaths is a statistic’

The problem, then, as I am sure Roger Fisher would phrase it was – How can the leader be enabled to acknowledge the full,visceral reality of the situation? How can we make the leader feel the entire weight and burden of consequences that decision will place on the leaders shoulders – for posterity?

You will notice that the problem is a remarkably good fit for the situation of business leaders when faced with the tough decisions on shutting down businesses and laying off people. We want leaders to not be caught up in the abstraction of downsizing and restructuring. We want them to know this is about livelihoods and families, about bread and butter on the table, about hopes and aspirations for parents and their kids. This is about so much more.

Roger Fisher came up with a solution to the problem that converted the problem from an abstract senario into a chilling palpabe reality. The attached article is super eloquent and should be read. 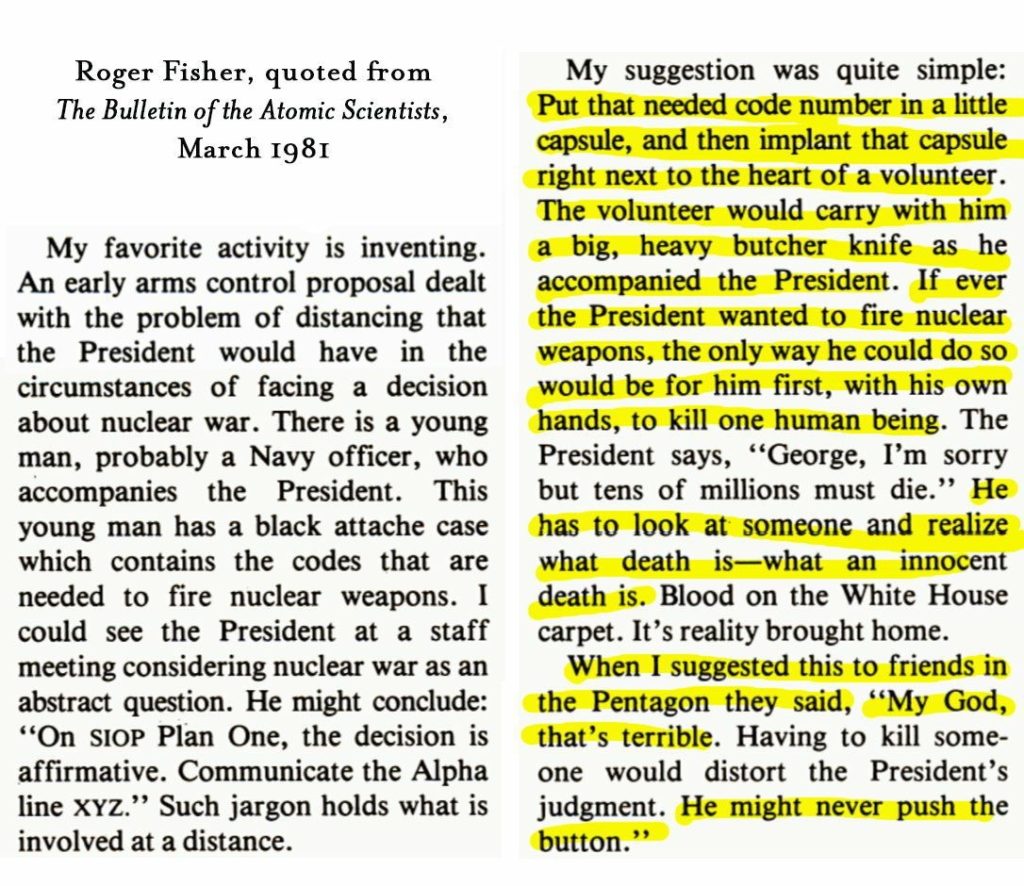 Here, let me just plainly describe it. Put the launch code of the nuclear attack in a capsule and surgically implant it into the heart of the leader’s aide. This aide is a volunteer who carries the nuclear briefcase where the numbers are to be fed in. When the leader has made a decision to launch the attack, all that the leader needs to do is use a butchers knife ( always kept ready for this purpose) to kill the aide and get the launch code over the dead body. Now, collateral damage makes for a real picture in the mind’s eye.

We need something similar to Roger Fisher’s brilliant solution – part thought-experiment, part real possibility in the social world. To not be trapped in the fog of language and metaphors. To put the focus back on the real and the palpable, the in-the-moment awareness.  To enable leaders to grasp the import and consequences of their actions in their gut so they quake a little in their boots and feel grounded into a reality of their own making.