Volodymyr Zelenskyy – the President of Ukraine – stayed back in Kyiv and is leading the fight against Russian invasion of Ukraine. People recognised his courage and willingness to die while defending his country. He has justly become a leadership icon. 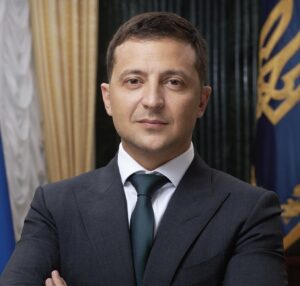 Even as Western allies, mainly the US, warned that the Russians were going to invade, Zelenskyy urged everyone, including the international community, to stay calm and not get carried away by a mass hysteria.

In the future, historians and analysts will ponder over the sagacity of his leadership utterances just before the invasion.

Let us explore a few dimensions of his leadership in this extremely trying time for his country.

Projecting calm before the invasion

As the leader of the purportedly weaker nation, Zelenskyy’s projected calm may have made it easier for a soon-to-be-embattled people to believe that he will hold his nerve and lead a fightback. Zelenskyy may have made a choice to not appear tense and desperate – at least publicly. Behind the scenes, he may have been unrestrained and channeled all the nervous energy into things that make him not lose his bearings. Actors incidentally are trained to do that.

Zelenskyy’s televised appeal to people of both Ukraine and Russia has firmly placed him on the right side of history. However, this dramatic address achieved a lot more than that. First, it was crucial in helping Zelenskyy swing the world to the cause of Ukraine. Secondly, it confounded attempts to paint him as the villain in Russia. And lastly, the biggest and indispensable gain was this – the resolve of the Ukranian people was made steely. Zelenskyy built a moral armour with his moving words. Ukrainians knew they were morally right to defend their country by all means possible. War gets really ugly and moral armour enables people to go through hell and come back.

Holding even your allies accountable

Even as Ukraine depends primarily on Western countries for aid of all kinds, Zelenskyy has not hesitated to call them out for their shaky and hesitant support. He has called a spade a spade in dealing with his allies. This further strengthens the moral armour his people are wearing in this fight for the very survival of the country. When you see your leader hold even friends accountable without worrying about withdrawal of support, the message that seeps in is this – “Nobody is really fighting this war on the ground, but us. We have only ourselves to depend on. So righteous is our cause that we don’t even depend on our friends for validation. We are fighting without fear or favour.”

Being open to a negotiated settlement

Zelenskyy has been ready for unconditional talks – everything is up for negotiation. The breakdown in talks between two warring nations as per the ebb and flow of battle is expected. What Zelenskyy wants to get right is the timing on one crucial aspect – his people’s estimation that we are negotiating after having shown that we can fight to the very end, should it come to that..This self-belief is vital for rebuilding the country when the guns fall silent. And Zelenskyy seems acutely aware of that.

The tension between symbolism & pragmatism

If there is one thing that defines leadership in war, it is the endless demand to make agonising choices – almost always been two necessary evils. You do the thing that is the bigger necessary evil. You need ruthless resolve and it is always made possible by moral callousness. War is not for the faint-hearted.

For Zelenskyy also, there are continuous agonising choices that he has had to make. One example is as follows.

On one hand, he has the choice of staying at Kyiv to maintain the symbolic determination of the Ukrainian people. If the leader of the nation has to flee the capital city – the seat of power – it dents the morale of the fighting forces and the people like no other.  Sure, the leader can lead the war from elsewhere, but the symbolic loss can be too much to bear. Symbolism dictates that the leader stays.

On the other hand, pragmatism dictates that Zelenskyy consider leaving Kyiv to save himself knowing that his very life is the flickering flame in the wind that sustains people’s hope. Staying in Kyiv, he will likely die and people may get irrevocably dispirited with nobody on the horizon there to replace him. Without their top leader, people lose the spirit to fight. If he leaves, he ensures his presence and actions continue to guide the resistance. He would be very pragmatic in doing so.

Should he stay or should he leave?

This tension between symbolism and pragmatism is just one of the many agonising choices Zelenskyy is grappling with.

Rising to the occasion

Zelenskyy rose to the occasion. Everything that happened in his life in the run-up to this war has played its part in shaping his response. The fact that he played the Ukrainian president in a television series would have really helped him. Drama creates empathy for the human condition. As an artist, Zelenskyy was privy to the best and worst of human nature. As a leader, this acquaintance has enabled him to not get bogged down by brutal reality. He has moved fast from awareness to acceptance to action.

What can we learn?

The next time we encounter extraordinary circumstances or adverse challenges , we can make it easy for the odd-ball characters, the square pegs in the round holes, the total misfits and the rank outsiders to take charge.

They may stand a better chance with their fresh perspectives and bold attitudes, both of which were unwelcome in conventional times.

We can appreciate that the lives that these people have led may just have prepared them to rise to the occasion and win the day!